Millions of doses given, billions invested in these ridiculous mRNA "gene-therapies" and no-one taking them anymore. So some genius says, "hey before the lots expire lets mix-n-match on our victi.. I mean the public".

Spahn told reporters that it would in future be possible to combine a first shot of the AstraZeneca (AZN.L) vaccine with a second shot of an mRNA vaccine like those from BioNTech/Pfizer (22UAy.DE)(PFE.N) or Moderna (MRNA.O).

Oh its always been possible, but just because you can doesn't mean you should.

He said that the addition of the mRNA shot provided more protection against the Delta variant, which is endemic in Britain and is expected to become so in Germany this month, than two shots of AstraZeneca's shot.

Germany has enough shots available of all vaccines to be able to do this, as well as to provide booster shots to those who wanted them in the autumn, he added.

Of course they do, there is excess now; huge batches of them, now that the fearful have all taken it the rest of the Germans are too clever and questioning of this bizarre situation; the memory of the Stasi and their tactics and the propaganda of the cold-war still sits uneasy with most of them.

Here is BillyGoats talking about how the lot expiry dates are too cautious because now they have invested and the public are saying "F*ck off", the investors are out of pocket. Good! F*ck those f*ckers

I love the rhetoric of that article "Are vaccine expiration dates too cautious?" ... I dunno heres one for them "is BillyGoats a devil-worshiping child raper and plane-sharing to lolita-island best friend of Epstein? and are Gavi part of an alliance of satanic baby eaters" Probably.. yes. But mostly 42.

Lol the fact-check is amusing too with all the fraud going on with German vaccines and tests who's to believe this nonsense.

I find it really weird that all the photos of German "imfzentrum" I see are always 1 or 2 people, mostly workers.... No one there... I wonder how much of the messaging is propaganda now.. "Everyone is taking it, so should you".

My Mothers words ring loud in my ears "If all your friends jumped off of a cliff, would you do it too?"...

"No. you're right Mum, thanks" 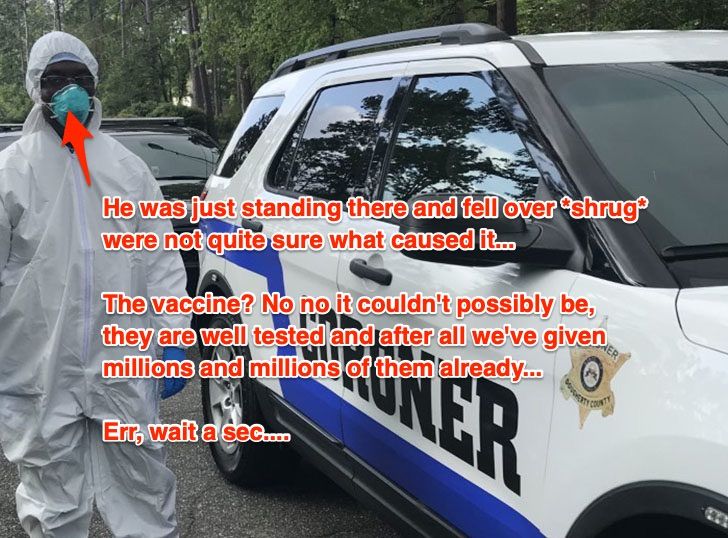